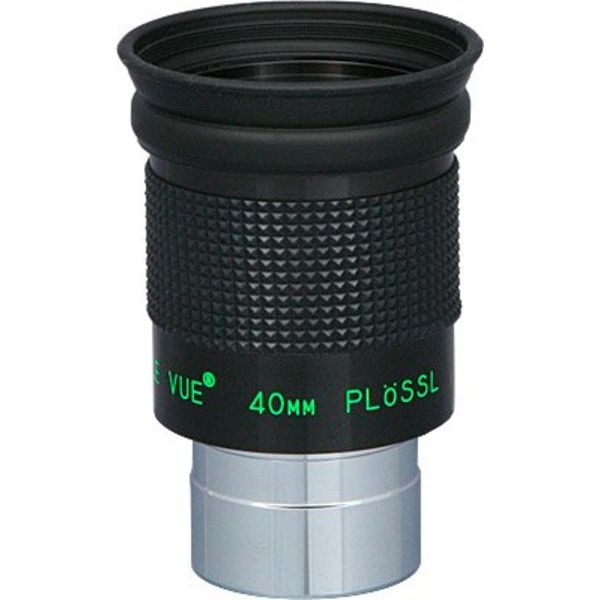 In the 1¼" series Tele Vue included a long eye-relief 40mm focal length in the series with a 43° apparent field. Its focal plane is at the barrel edge for maximum field in the 1¼" format.

Since the introduction of Plössls in 1980, they have won praise and patents, including a patent in Japan. Tele Vue Plössls, designed by Al Nagler, have been a recognized benchmark of performance and value in the class of 50° apparent field of view eyepieces. While the Plössls may be the least expensive eyepiece line, they still enjoy the same care and attention to detail as the most expensive. While it's easy for other manufacturers to vie for the lowest price, Tele Vue continues to believe that quality, performance and consistency will ultimately reward you with the most value for your dollar.

Diffraction limited "on-axis" performance is a given. Using more expensive high-index glasses to reduce astigmatism and lateral color at the field's edge, Tele Vue Plössls deliver sharper images than any other brand of 4 or 5 element "Plössls" or Orthoscopic designs. The faster the focal ratio of your telescope, the greater your visual reward for using Tele Vue eyepieces. Tele Vue Plössls feature full multicoatings for greatest light transmission and contrast. Blackened lens edges and internal anti-reflection threads tweak the last bit of contrast for maximum image detail. The sharper field focuses faint star light into perceptible points and allows those with undriven mounts to gaze longer before repositioning the image.