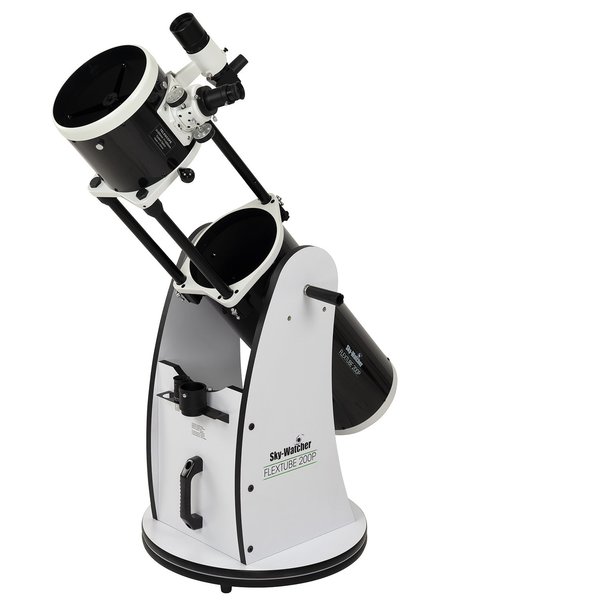 Corresponding to the escalating "aperture fever" that has gripped amateur astronomy for several decades, an 8" diameter is now generally regarded as the minimum entry-level aperture for serious observing. The low cost, large diameter, and fast focal ratio of the 8" Sky-Watcher Dobsonian make it an ideal dedicated telescope for wide-field, deep-space observation of faint galaxies, nebulae, and star clusters. The low-power dramatically captures wide swaths of sky in a single view. Galaxies and nebula appear to pop out of the heavens as bright, expansive masses of stars, gas, and dust.

Observing with the 8" Sky-Watcher Dobsonian

If you have never before observed through a high-quality, wide-field Dobsonian, like the SW 8" DOB, you are in for one of the sweetest experiences in amateur astronomy. Imagine the exhilaration of opening a clam and discovering a pearl. The sky is full of pearls, astronomical pearls. While they won't make you rich in the financial sense, for amateur astronomers at least, observing the fabled pearls of deep-space is a rich and even exhilarating pastime. A catharsis for the soul that renders the mundane insignificant, and reconnects us with the inner child who revels in awe and wonderment. A night observing with the SW 8" Dob can leave you with a lingering sense of contentment long after the evening's viewing is over. Some of amateur astronomy's most revered and enthusiastically observed extra solar-system objects are now within your reach. This instrumentation provides entry into the brotherhood of serious amateur astronomers—you have arrived! The summer sky is aglow with astronomical pearls. In the constellation Sagittarius several of the sky's most prominent emission nebulae can be seen well in your 8" SW DOB. The Lagoon Nebula (M8) is a rich aggregation of dust and gasses illuminated by its youthful central stars. This is an area of star formation, the universe giving birth. The Lagoon Nebula appears fiery red in astrophotographs due to the hot hydrogen gas. Located nearby is the smaller, but very beautiful Trifid Nebula (M20). These two nebulae can actually be seen in the same field of view. The magnificent Swan Nebula (M17) is also located in Sagittarius. It is named the Swan for its resemblance to the stately bird. The sky's most awesome globular star cluster, M13, is located in the constellation Hercules, a bee-hive of thousands of stars swarming about a central core. Globular clusters are no longer being formed in the universe, so you are observing fossil light, a glimpse back in time. This is the brightest object of its kind and always a treat to view. The globular cluster M92 is likewise very interesting and can also be found in Hercules. The winter sky holds several stunning pearls oft referred to in popular culture, not just astronomy. Our closest external galaxy, the beautiful Andromeda, perhaps the defining galaxy of the classic spiral form can essentially be seen almost in its entirety within one eyepiece field. Winter's diffuse Great Orion Nebula (M42) is the brightest emission nebula in the heavens. While it can be seen with the naked eye from a dark location, it is nothing less than spectacular in an 8" SW DOB. A billowing cloud-like cauldron of dust and gasses illuminated by large, intensely glowing youthful stars, this object is perhaps the mother of all pearls. The preceding is just a short sampling of objects that can be seen. Many more pearls of the night sky await you.