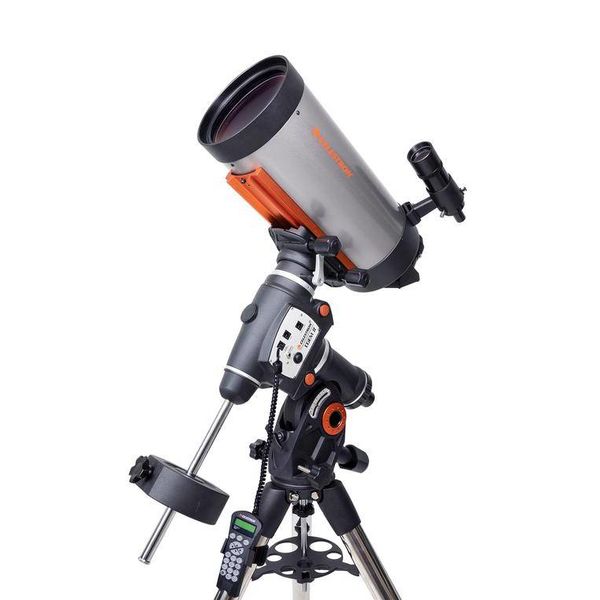 The 700 Maksutov-Cassegrain CGEM II telescope (CGEM II 700 Mak) is a specialized instrument designed for detailed, high contrast views of smaller celestial objects like the planets. With the Maksutov-Cassegrain optical tube and sturdy equatorial mount and tripod, this kit will provide unparalleled views of the planets and up-close views of the lunar surface, including craters and maria, Maks are also well suited to hunting smaller, fainter, deep sky objects such as globular clusters and planetary nebulae.  Astronomers located in urban astronomers will appreciate the Mak’s ability to bring out more contrast in celestial objects. Transporting the entire system to a dark site is not a problem either. The optical tube, mount head, tripod, counterweight bar, and counterweight all disassemble, with no tools required, into separate manageable pieces.

The Mak is a catadioptric telescope, which means the optical design includes both a lens and a mirror. The light coming through a Mak passes through the corrector lens to the primary mirror and back to a spherical secondary mirror before it hits your eyepiece. Images are bright, sharp, and virtually free of chromatic aberration.

The Maksutov-Cassegrain’s optical design offers several unique benefits. Instead of a secondary mirror, the Mak features a “secondary spot” of reflective coating applied directly to the inside of the corrector plate. Because of this, the telescope does not require frequent collimation like a Schmidt-Cassegrain. Also, the secondary spot is significantly smaller than a traditional Schmidt-Cassegrain secondary mirror, giving the Mak its signature high-contrast views.

One important thing to note about Maksutov-Cassegrain telescopes is that the larger, heavier Maksutov corrector plate takes longer to cool down and adjust to ambient air temperature compared to a Schmidt-Cassegrain of the same aperture.

CGEM II is a sturdy equatorial mount capable of rigidly supporting the 700 Mak. Its 40 lbs load capacity can handle the 19 lbs optical tube with ease, leaving lots of capacity to spare for your camera and any accessories. The heavy-duty adjustable height tripod has 2” diameter steel tripod legs with graduated markings that make it easy to extend the legs to the same height. The 700 Mak connects directly to the CGEM II with its CGE dovetail mounting bar.

The mount is packed with functionality and conveniences that make imaging with the 700 Mak easy. The fully computerized mount will automatically “GoTo” any of the 40,000+ astronomical objects selected from the NexStar+ hand controller’s database and automatically track the object as it appears to move across the night sky.

Designed with imaging in mind, the CGEM II motor drive system accurately tracks during an exposure. At the heart of the system are low cog DC servo motors with integrated optical encoders. The low cog design helps the motors run smoothly, while the integrated optical encoders provide accuracy. The motors turn steel worm gears, which are supported by precision bearings, against brass worm wheels. These components also help to make the motor drive system operate smoothly and accurately.

To track objects in the night sky, the mount must first be polar-aligned. Celestron makes this process easier than ever with the innovative All-Star Polar Alignment procedure. No extra equipment, such as a polar finder scope, is required. (An optional polar alignment finder scope is available if desired.) Best of all, the alignment can usually be completed in about 15 minutes, even without a clear view of Polaris.

All mounts have some amount of “periodic tracking error” inherent in them caused by tiny gear imperfections. To mitigate this, the CGEM II has Permanent Periodic Error Correction (PPEC). This allows you to run a routine to record the periodic errors only once; the recording is kept in memory, and subsequently corrects for the mount’s periodic tracking error. If an even higher level of tracking accuracy is desired, the CGEM II also has a dedicated autoguider port to connect an autoguiding camera directly to the mount to correct for any residual tracking errors.

Conditions for imaging are best when celestial objects are at their highest point in the sky with the darkest background, called the meridian. But some German equatorial mounts have trouble tracking near the meridian because they need to perform a “meridian flip,” readjusting their position to avoid the tube striking the mount. CGEM II does not suffer from this problem, imaging through the meridian with ease and not requiring a meridian flip until the object is a full 20° past the meridian.

The NexStar+ also has dozens of other functions to control every aspect of the mount’s behavior. These include:

In addition to the autoguider port, the CGEM II also has other ports to enhance and expand the capabilities of the mount. The hand controller has a USB 2.0 port for those who wish to control the mount with an external computer and optional third-party software. There is an AUX port on the mount that can support optional accessories such as StarSense AutoAlign.

When imaging, cable management can be a problem. The camera has a cable, the mount’s power source has a cable, and additional cables can come from a computer connection and augtoguider. To minimize cable management issues and prevent unwanted snags, all cabling for the mount is housed internally. This also eliminates the need to connect or disconnect an external Dec. motor cable when the mount is set up or broken down.

The CGEM II 700 Mak comes complete with a 2” Visual Back, a 2” Star Diagonal with 1.25” adapter, a 28 mm wide-field 2” eyepiece, and a large 8x50 straight-through finderscope. The optical tube accommodates the larger 2” accessories, such as 2” Barlow lenses, the 2” eyepiece and filter kit, and larger wide-field eyepieces.

StarBright XLT is Celestron’s revolutionary optical coating system that outperforms any other coating in the commercial telescope market. There are three major components that make up our StarBright XLT high-transmission optical system design: